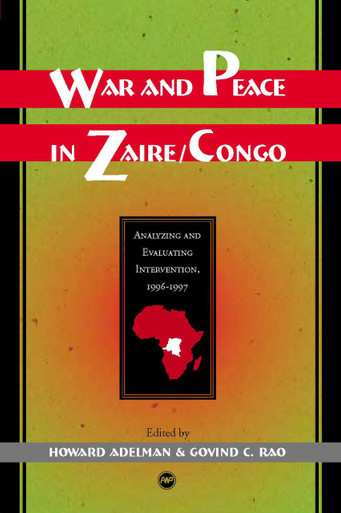 The 1994 Rwandan Genocide continues to have serious repercussions for peace and stability in the Great Lakes region of Africa. As we recently saw, the key element of the July 30, 2002 Pretoria peace agreement between Rwanda and the Democratic Republic of the Congo (DRC) was the latter's commitment to disarm and repatriate Rwandan Hutu militants.

This volume continues where most books on the region leave off. The contributors make the connection between the Rwandan Genocide and the continuation of the conflict onto the territory of Zaire, which finally culminated in the overthrow of Mobutu Sese Seko's kleptocratic regime. The reasons for war and the missed opportunities for peacemaking turned on the issue of separating the approximately million refugees from the armed militias and former Rwandan Army (ex-FAR) in Eastern Zaire. At the center of the conflict over the refugee camps were the questions: Who are refugees? Can they be repatriated against their wishes? Who are combatants? Who is responsible for separating each from the other? Is this an example of justifiable humanitarian intervention?

The chapters in this volume cover the many dimensions of the conflict, giving the reader a comprehensive understanding of an unprecedented continent-wide war, which drew in combatants from at least eight neighboring African countries and spanned the breadth of central Africa. By examining the question of how to best handle the problem of refugee warriors, which has long been a source of instability in the Great Lakes Region of Africa, a number of distinguished contributorssome of whom were on the ground as the events were unfoldinglay out the complex roots of the problem in this important volume.

ABOUT THE EDITORS
HOWARD ADELMAN is a professor of philosophy at York University, Toronto, Canada. He has written extensively on the Middle East, humanitarian intervention, membership rights, ethics, early warning and conflict management, refugee repatriation, policy and resettlement. He co-edited, with Astri Suhrke, a major study entitled Early Warning and Conflict Management: the Genocide in Rwanda and The Path of a Genocide: the Rwanda Crisis from Uganda to Zaire.

GOVIND RAO is a Ph.D. candidate in the Department of Political Science andis affiliated with the Centre for Refugee Studies, York University, Toronto, Canada.