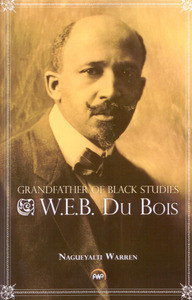 More than any other scholar, political activist or professor of his day, W.E.B. Du Bois established the intellectual and curricular groundwork for what would become the field of Black Studies in higher education in the United States. Beginning with his social study, The Philadelphia Negro, in 1898, Du Bois challenged the status quo regarding knowledge about the black experience in the United States. With the Department of Labor and the Atlanta University reports he documented the facts of black life. This book delineates the undaunted effort that Du Bois exerted in order to educate black people about themselves and to rectify the misconceptions of whites.  The Great Depression, Du Bois believed, had exacerbated racial consciousness. He planned to remedy the situation of worsened race relations with a serious program of Black Studies. His plan was presented to the Annual Conference of the Presidents of Negro Land-Grant Colleges in 1941, but it would be more than twenty –five years before the first Black Studies program would appear in American higher education and it would not be at a black institution.

"As Black Studies moves into its fortieth year, Dr. Warren's work reminds and introduces how connected the goals and curriculum of Black Studies is related to the works of W.E.B. DuBois. Most significant is the chapter which highlights the work DuBois did on Black women. As an advocate for gender justice, DuBois also laid  the foundation for what is now known as Black Women's Studies." - Dr. LaVerne Gyant , Director, Center for Black Studies , Northern Illinois University

"This is the first book length study to adequately capture the evolution of Black Studies’s genealogy in the early work of Du Bois, which Warren delineates in a fine way." -Dr. Beverly Guy-Sheftall, Anna Julia Cooper Professor of  Women's Studies, Spelman College