VOICES OF A BLACK NATION: Political Journalism in the Harlem Renaissance, by Theodore G. Vincent 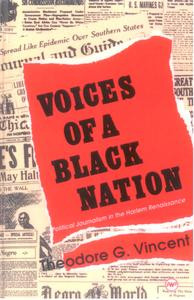 VOICES OF A BLACK NATION: Political Journalism in the Harlem Renaissance, by Theodore G. Vincent

This collection of writings from the black movement press of the twenties and on through the thirties provides valuable insight into the major political and ideological currents among black groups of that time, as well as the means of persuasion employed by black journalists during this significant era...

"Voices of a Black Nation is a valuable collection of historical documents which tells us where the black press and black movements have been and,, by extension, provides us with insight into the black liberation movement today. For perhaps the most important function of the black press is to record the black struggle as it happens, not through the retrospective survey of documents, which is the historian's method, but in registering the immediate, contemporary and timely political realities as they existed then ans as they still live among us now." -Robert Chrisman, Editor, The Black Scholar