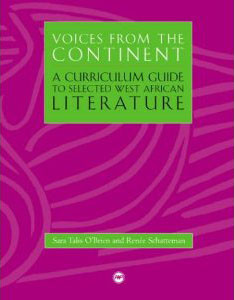 Voices from the Continent will be a useful resource for college professors and teachers of English and social studies on the high school level who seek to diversify the standard curriculum by introducing students to modern African literature written or translated into English.

The lessons contained in this guide may be used in whole or in part, and they may be integrated into larger units on world literature, cultural diversity, psychology, social studies, sociology, and women’s studies.

ABOUT THE AUTHORS
SARA TALIS O'BRIEN trains teachers as an associate professor of education at Saint Peter's College in New Jersey. She has taught African literature, anthropology, sociology, and religion in the United States and trained teachers in East, West, and southern Africa. She has published several works in African Studies including A Teacher's Guide to African Narratives (Heinemann 1994).

RENEÉ SCHATTEMAN is an assistant professor of English at Georgia State University where she teaches post-colonial literature and assists in the teacher education program. She specializes in African literature and has published a number of articles, reviews, and interviews about African women writers and writers of the African diaspora. Previous to her doctoral studies, she taught secondary English in Zimbabwe and in the United States.