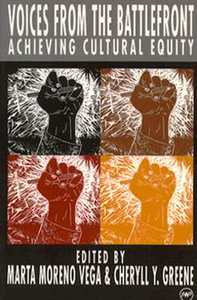 Voices From The Battlefront is a collective call to action, a declaration of war, a clarification of intent. The assumptions of multiculturalism--as currently practiced-- are laid bare under the scrutiny of some of the most committed cultural workers of today, making patently evident that at best it has evolved into just another affirmative action ploy: and at worse it is a systematic co-option of world cultures towards political, social, or economic purposes that are antithetical to their values. Voices From The Battlefront reaffirms the original impulse towards cultural equity that inspired the coalitions among African, Asian, Native and Latino Americans during the late 1970s and early 1980s.
-Lowery Stokes Sims
The Metropolitan Museum of Art, New York, NY

Voices From The Battlefront is the cultural equivalent of Kwame Nkrumah's Handbook Of Revolutionary Warfare. It will be required reading and a training manual for all of us who take up arms in the war zone of cultural inequity and imperialism. We come to fight alongside those who are already in the trenches. We come to give rest to those who are returning from the front line. Let us soberly make our alliances and carefully craft our weapons. "Art will be the last frontier."
-Baraka Sele
Center for the Arts at Yerba Buena Gardens, San Fransisco, CA

Voices From The Battlefront is an informative, powerful, provocative "scream." The many authors, representing African, Asian, Latino, European and Native cultures and their descendants, though singing in different styles and tones are nonetheless singing the same songs in harmony... I challenge anyone to read these essays with an open heart and mind and not be changed...
-Stephanie S. Hughley
Atlanta Committee for the Olympic Games, Atlanta, GA