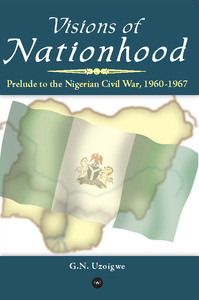 Visions of Nationhood is a refreshingly bold and informed study of why Nigeria’s three dominant sub-national groups—the Hausa-Fulani of the Northern Region, the Igbo of the Eastern Region, and the Yoruba of the Western Region—were collectively unable to reconcile their conflicting visions of Nigerian nationhood, and thus created situations that forced the Nigerian military to topple the government of Abubakar Tafawa Balewa within six years of Nigerian independence. Obliquely, the book is an engaging treatise on government, emphasizing in the tradition of Hobbes, Locke and Rousseau that government is essentially a contract between the ruler and the ruled, a breach of which by either party leads to disastrous consequences. Thus, the failure of the Nigerian central government, either deliberately or through inability, to fulfill its sacred undertaking in the contract of government led to the secession of the Eastern Region and made the descent into civil war unavoidable.

Although Visions of Nationhood is a study of the early postcolonial history of Nigeria, its appeal is universal because as the author notes, all over the contemporary world, in both the industrialized nations and the industrializing ones—even among those that claim to be democracies—those who exercise political power have not always recognized their obligation toward the ruled, have not always operated as if government is a sacred contract between the people and their government. For many of the so-called democracies, a government erected through the process of universal adult suffrage, often rigged—sometimes even blatantly—is seen as an end in itself rather than as a means to an end. Hopefully, this book may help to stimulate more interest in the study of the Nigerian Civil War or the Nigeria-Biafra War as some prefer to call it.

ABOUT THE AUTHOR
G.N. Uzoigwe received his doctorate degree in history from Christ Church, Oxford University. He is currently Professor of History at Mississippi State University, having served as Department Head (1999-2005). A widely travelled and prodigiously published scholar, Uzoigwe has previously taught in various universities in Africa and the United States, where he also served variously as department head and college dean. A recipient of several distinguished awards for academic leadership, he is a Fellow of the Historical Society of Nigeria and served as the society’s President (1988-1992). His books include Britain and the Conquest of Africa: The Age of Salisbury (1974); History and Democracy in Nigeria (1990); Foundations of Nigerian Federalism: The Colonial Period, 1900-1960 (1996); Inter-Ethnic and Religious Conflict Resolution in Nigeria with Ernest Uwazie and Isaac Albert (1999); Troubled Journey: Nigeria Since the Civil War with Levi Nwachuku (2004); Uganda: The Dilemma of Nationhood (1982).