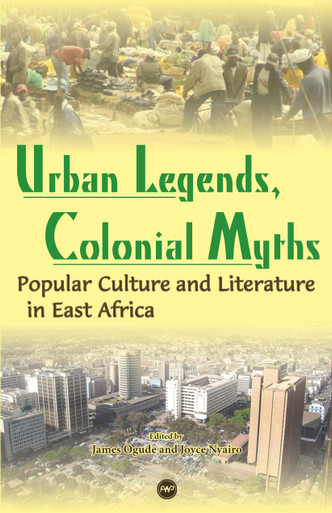 This book is a significant addition to a growing body of scholarship on popular cultures role in mediating contemporary life and power relations in Africa. The book is a demonstration that popular cultural productions are not fixed to an unchanging social category as the basis for their creation, but are defined by mobility of ideas, creative borrowing and improvisation.

It deals with popular media, ranging from inscriptions on matatu (taxis) to cartoon strips and fiction columns in newspapers. If cartoon strips and humour columns in popular periodicals provide alternative sites of expression in a fast-evolving socio-cultural formation, then the matatu discourses signal a radical avant-garde African cultural expression. The book also provides a compelling reading of how urban legends, rumours and jokes proliferate alongside pop music to express a sub-culture that is at once a critique and a celebration of modernity and its fragments.

It draws attention to the evolution of popular music at different historical moments in East Africa and locates the verve of vernacular discourses as a dominant factor in the artistes creative geniuses, while pointing to how this music has melded with other external influences. Of major interest in this volume is how the more recent output of popular fiction has been fuelled by the effect of HIV/AIDS, giving credence to the fact that popular literature and culture feeds off topical issues of the day.

'Urban Legends, Colonial Myths' is the most comprehensive study of popular literature in East Africa to date. It brings together some of the best students and scholars of the popular imagination in Africa who, with theoretical sophistication and a keen sense of cultural history, provide insights into the production of forms of expression that have been central to understanding what it means to be African in the modern world. In the world of popular artists, a new Africa has been in the making for the last fifty years, and here we have an enduring record of an imagination that calls into question what we thought were established notions about African identities.

"'Urban Legends, Colonial Myths' is an essential reading for all who want to understand East African literature, culture and Society. The specialist and the general reader will find something to enjoy and think about in this wonderful collection of essays.

JAMES OGUDE is Professor of African Literature and Assistant Dean for Research in the Faculty of Humanities, University of the Witwatersrand, South Africa. He is the author of "Ngugis Novels and African History: Narrating the Nation," London: Pluto Press, 1999.

JOYCE NYAIRO is Senior Lecturer in the Department of Literature, Theatre & Film Studies at Moi University, Kenya. She has published articles on the significance of popular music in leading journals like "African Studies" and "African Affairs." She has served as an assessor for the Noma Award for Publishing in Africa since 2003 and is an occasional reviewer for the "Times Literary Supplement."