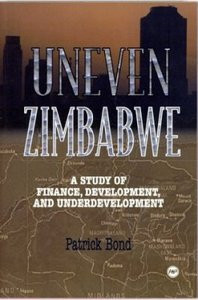 "Patrick Bond's Uneven Zimbabwe strikes me as timely, thoroughly researched and stimulating. Anyone interested in the role of Finance capital in processes of development/underdevelopment should read it" - Giovanni Arrighi

"This book is a sweeping survey of Zimbabwe, of the intertwining of capital and citizenry, of the power of global and local finance, and of the shaping of the political and policy terrain. It is a fresh and honest analysis and certainly for many Zimbabweans, the most important book on economics and politics to date" - Tendai Biti

Robert Mugabe once complained, "There exists among the membership of ZANU (PF) a minority, but very powerful bourgeois group which champions the cause of international finance and national private capital, whose interests thus stand opposed to the development and growth of socialist and egalitarian society in Zimbabwe"

Uneven Zimbabwe examines the influence of domestic and international financial markets and financiers in uneven development in Zimbabwe, using, - and contributing to - the tools of radical political economy. Theoretically, Bond begins with criticism of classical Marxist concepts of "finance capital" for focusing on institutional characteristics and failing to grasp the underlying dynamics. Instead, as economic crisis tendencies emerge, the power of finance periodically intensifies, temporarily displacing crisis through time and space and across geographical scales. But the limits of the financial solution become evident when paper assets delink from the productive assets they are meant to represent, as well as in the role that finance plays in amplifying uneven development across different economic sectors, spaces and scales.

ABOUT THE AUTHOR
PATRICK BOND is Senior Lecturer (Economic Policy) and Assistant Director (Research) at the University of the Witwatersrand Graduate School of Public and Development Management in Johannesburg. During the early 1990s, he was a researcher for the Zimbabwe Congress of Trade Unions and the Harare Street People's Organization, wrote a regular column for the financial Gazette in Harare, and contributed to many other Southern African periodicals. Patrick Bond was born in Belfast, Northern Ireland, in 1961, moved permanently to Southern Africa in 1989, and presently lives in Johannesburg with his son.