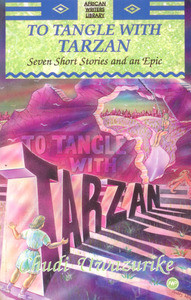 "The trauma of Nigeria's encounter with the West provides the theme for these engaging stories of village and urban life. Introduced by a fable and concluded with a lively retelling of an Igbo epic of resistance to 'The Pink Men from across the seven seas,' To Tangle With Tarzan offers Uwazurike a broad canvas for his intention." -Raymond R. Patterson

ABOUT THE AUTHOR
CHUDI UWAZURIKE, who was educated at the University of Nigeria, Nsukka, received higher degrees at Lagos and Harvard Universities. A winner of the John F. Kennedy Essay prize and the 1978 Nigerian Independence Essay Competition Award, his play House of Little Regrets, won First Prize at the Niger Schools Festival in 1980. Another play, The Flycatcher's Identity was performed off-Broadway in New York in 1991. He is the founder of the theater group, Nakanu Players of New York, and of Profilers International, a periodical on Africa and the world. His scholarly works have appeared in various journals in Europe, the United States, and Nigeria.