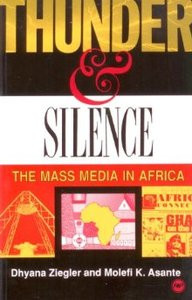 Contents:
The Foundations
Newspapers and the Colonial Context
Media Control and National Development
Electronic Broadcasting in Africa
Two National Perspectives on the Media
Problems and Prerogatives
The Potential for Press Freedom
Access to International Information
The Media and Ideology: A Final Note
The Leading media Institutions in Africa
Rural Newspapers in Africa
African media Facts by Region
Electronic Broadcasting by Region

ABOUT THE AUTHORS
DHYANA ZIEGLER, Associate Professor of broadcasting at the University of Tennessee, Knowxville, has published several articles in the field of mass communication and television broadcasting. Professor Ziegler is also a television producer and writer of documentaries and news programs.

MOLEFI KETE ASANTE, Professor and Chair of the Department of African American Studies at Temple University, has written numerous articles in the field of communications. One of his books in this field in Mass Communication Principles and Practices published by MacMillan.