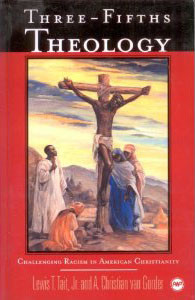 Three-Fifths Theology is a unique book by two authors from different intellectual perspectives who both share an important perspective with one goal in mind. Written by an African American and a European American, this book enters the conversation about racism in American Christianity. The term, “three-fifth theology,” is used by both authors to describe the way aberrant American Christianity often supports status quo injustices because it is founded in cultural contexts and political assumptions that are racist. Tracing how “three-fifths theology” has allowed de facto segregation to flourish at the expense of Biblical Christian unity, both authors aim to call the church to social justice and to present key characteristics of an afrocentric worldview as antidotes for the problems inherent in contemporary American Christianity.

The book is divided into three sections. The four chapters in the first section are designed to provide the reader with an afrocentric perspective on American society and examine the need for African American Christians to educate their numbers in a more afrocentric view and for Euro-Americans to confront the legacy of segregation in their faith and culture. The first section concludes with an evaluation of the political forces at work in contemporary culture that maintain de facto segregation. In section two, Tait, Jr. and van

Prophetic and timely, Three-Fifths Theology is confrontative without wallowing in the

mire of victimization. It offers bold, provocative solutions, which the authors hope will

inspire discussion and debate. Thorough in its scope, this motivational book will appeal

to both academic and non-professional readers.