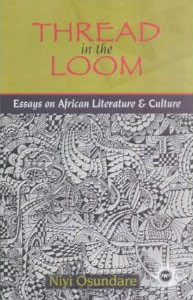 Even in this age of globalism, Africa still hangs precariously on the margins as a zone of abysmal silence and disarticulation stripped of agency and talk-back capability. It remains largely invisible on the map of the global village drawn by those who control the paper as well as the pencil. In an age of “travelling theories” and “travelling texts,” generated ideas and prejudices travel with imperial ease and confidence in Africa while the “canon war” makes it extremely difficult for African texts to make it to the reading lists of European and American institutions. Related problems such as a grossly maladjusted economy with the myriad socio-economic injustices spawned by it, political instability, dictatorship, and intolerance have affected the literary and cultural scene in near apocalyptic proportions. This selection of essays addresses these and other issues from the author’s perspective as an African writer, academic, social critic, and regular contributor to media discourse.