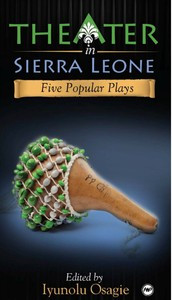 The growing corpus of published Sierra Leonean literature would not be complete without the inclusion of plays by Sierra Leonean dramatists. Scholars, such as Eldred Durosimi Jones, generally agree that the vibrancy of drama in Sierra Leone has not been recognized outside the country and scarcely engaged by the intellectual community. This situation is palpable because of the weak publication history in the field. Although playwright Sarif Easmon put Sierra Leone on the artistic map with the publication of his two major plays in the 1960s, followed by Yulisa Amadu Maddys collection of plays, Obasai and Other Plays, in 1971, other artists did not follow suit with this publishing trend.

In reality, theatre as a positive developmental force began in the 1970s with Raymond Dele-Charleys classic The Blood of a Stranger and continued unabated until the civil war reached Freetown, the capital city, in the 1990s. Sierra Leone enjoyed a thirty-year period of immense growth in terms of the proliferation of amateur and quasi-professional theatre groups, the quality of written plays both in the vernacular and in English, and the record number of performances. Theater in Sierra Leone: Five Popular Plays, a collection of plays in English, is an attempt to revisit that remarkable era, the 1970s, 80s, and 90s, and to make some of the plays accessible to a world audience, to scholars, and to College and High school students.

The five plays in the volume are from some of the most recognizable dramatists in the country, dramatists who have made the most significant contributions to the climate of theater in Sierra Leone since the 1960s: Dele Charley, John Kolosa Kargbo, Julius Spencer, Tonie French and Mohamed Sheriff. The collection begins with a very succinct introduction by the editor, placing the plays within the context of the historical development of Sierra Leonean drama. Offering a brief critical analysis of each play, the editor also highlights some of the social, political, and historical issues that playwrights have grappled with, such as colonial arrogance, the ambivalence of history, the exploitation of African womanhood, and the consequences of modernity.

Iyunolu Osagie was born and raised in Sierra Leone. She is Associate Professor of English at the Pennsylvania State University, Her research and teaching interests include African and African American literatures and theories, Black playwrights, Third World womens literatures, and Contemporary Slavery. Her research focuses on Black diaspora/transnational studies, especially African and African American cultural memories. Her book, The Amistad Revolt: Memory, Slavery, and the Politics of Identity in the United States and Sierra Leone (Athens: University of Georgia Press, 2000), highlights the historical Amistad as contemporary cultural memory. Her first play, The Shield, is about the Sierra Leone civil war.