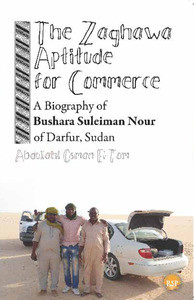 Unlike many publications on Africa, this book is not about failure.  It is an uplifting story of success which we rarely read about in Africa nowadays.  Based on research that covers several countries, this work analyses the emergence of the Zaghawa of Darfur as a powerful commercial force in Sudan and beyond.

Until a few decades ago, the Zaghawa were nomads, living with camels and other desert animals.  Like many pastoralists in sub-Saharan Africa, the Zaghawa lost their wealth to drought coupled by catastrophic political instability.  However, and unlike their neighbours who suffered the same disasters, the Zaghawa persevered and prospered.  As the book eloquently shows, they have succeeded in adapting the very cultural strategies evolved for nomadic life to an urban setting.  The result is spectacular.  The Zaghawa are now famous for dominating corner shops, open markets and border trade, in addition to securing substantial stakes in pharmacies, currency exchange outlets, big companies and banks.  They have indeed joined the elite commercial “tribes” of Africa like the Bamiléké of Cameroon, the Ibo of Nigeria, the Susu in Guinea, the Ewe in Togo, the Baganda in Uganda and, of course the Jallaba of Sudan.

This book is organised around the life of a single Zaghawa trader - Bushara Suleiman - an approach that allows the reader to relive Zaghawa culture and explore the very specificities behind their commercial spirit.  Its methodology is well grounded in anthropological research and hence the publication is also informative and rich in ethnographic details.

This work is not only academic.  It is written for everybody and in a language accessible for all readers.  It is a story of resilience, entrepreneurship, and success.

“This book combines in an amiable style biography and autobiography. It is not simply the story of a successful African trader. It is a modern history of Darfur told by an anthropologist in a way that every reader can appreciate.

“Abdullahi El-Tom has produced yet another vibrant narrative from his native Darfur, this time bringing us the extraordinary career of Bushara Suleiman Nour, a Zaghawa entrepreneur, from his childhood in a rural Sudanese village to the status of highly successful trader across North Africa and the Middle East. In doing so, by drawing on his anthropological training, the author demonstrates how the Zaghawa have turned the catastrophe of drought into opportunity, based on their skills as traders.

Abdullahi Osman El-Tom, Ph.D. is a senior lecturer in the Department of Anthropology, National University of Ireland, Maynooth (NUIM).  Born in Darfur, Sudan, he has lived in Ireland for over two decades.  His most recent books also published by The Red Sea Press are Darfur, JEM and the Khalil Ibrahim Story, 2011 and Study War No More: Military Tactics of a Sudanese Rebel Movement, 2013.