THE YAMBO OUOLOGUEM READER: The Duty of Violence, A Black Ghostwriter's Letter to France, and The Thousand and One Bibles of Sex, by Yambo Ouologuem, Translated and Edited by Christopher Wise, 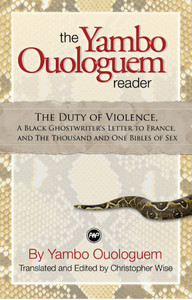 THE YAMBO OUOLOGUEM READER: The Duty of Violence, A Black Ghostwriter's Letter to France, and The Thousand and One Bibles of Sex, by Yambo Ouologuem, Translated and Edited by Christopher Wise,

Yambo Ouologuem is perhaps Africa’s most controversial writer. His novel Le devoir de violence, which won the Prix Renaudot in 1968, was banned in France for more than three decades before its recent reappearance. In the U.S.A., France and Africa, Ouologuem’s work has been criticized, debated, analyzed, and interpreted by countless writers, critics, and professional academics, many of whom remain sharply divided about his historical legacy. The Yambo Ouologuem Reader offers a fresh translation of Le devoir de violence, newly entitled The Duty of Violence, along with translations of two other texts by Ouologuem that have never appeared in the English language, Ouologuem’s controversial A Black Ghostwriter’s Letter to France and an excerpt from his erotic novel, The Thousand and One Bibles of Sex (originally published under the pseudonym of Utto Rodolph). Although not as well known outside the Francophone world, Ouologuem’s other literary works are provocative texts in their own right that also break new ground for African literature, as well as offer further evidence of Ouologuem’s literary genius. Ouologuem’s writings are not for the faint of heart. Ouologuem’s aversion for Senghorian négritude and more idyllic depictions of Africa’s past is, for some readers, a refreshingly honest dimension of his work, whereas others have found Ouologuem’s vision of African history to be terrifying. Most of Ouologuem’s readers agree, however, that he is one of Africa’s most original writers, who is certain to provoke, disturb, and unsettle those who read his books. The texts contained in The Yambo Ouologuem Reader are essential reading for all those interested in African literature.

CHRISTOPHER WISE is the translator of Norbert Zongo’s The Parachute Drop (Africa World Press, 2005). He has also edited The Desert Shore: Literatures of the Sahel and Yambo Ouologuem: Postcolonial Writer, Islamic Militant.