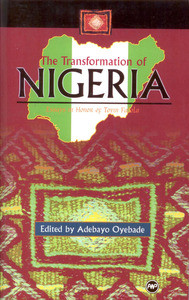 The Transformation of Nigeria: Essays in Honor of Toyin Falola covers all the major themes in the modern history of Nigeria: education, law, political development, economy, gender, ethnicity, language, cultures, and art. The contributors work with original manuscripts and fresh interpretations to present, in a single volume, the most original and comprehensive knowledge about Nigeria, Africa's most populous country.

The book is offered as the first tribute to celebrate and honor the immense contribution of Professor Toyin Falola to the study of Africa in general and Nigeria in particular. A distinguished Africanist and a leading historian of Nigeria, Falola has established an enduring academic legacy. No modern historian of Africa has received more praise than him. Regarded as the most prolific and brilliant historian of Africa in the last quarter of the twentieth century, his vast reputation and matchless record ensure that he will also be one of the most dominant historians of Africa in the twenty-first century.

ABOUT THE EDITOR
Adebayo Oyebade holds a Ph.D. from Temple University, Philadelphia. He has taught in various universities, and is currently at Tennessee State University. Among his recent publications is Africa After the Cold War: The Changing Perspectives on Security (AWP).