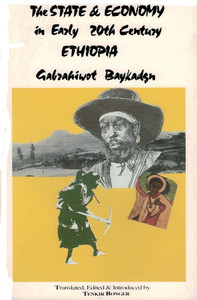 Published posthumously in Ethiopia in Amharigna (Amharic) in 1924, Gabrahiwot's work still has relevance after his death. It serves as a graphic introduction into the political economy of Ethiopia at the turn of the century, guiding the reader through political and economic changes which significantly affect the peasant farmer far more than the state official. In exposing the military character of Ethiopian economic development, and by concretely analysing the country's internal system and its relationship with dominant European states, Gabrahiwot advances economic ideas which were clearly systematised within his thinking: the theory of labour and value and the basis of exchange economy, the relationship between the peasant and the trader, the role of developed societies in the unfair relationship in currency and produced goods. All these issues are dealt with forthrightly and with a commitment to resolve the problem of a mass-based dependency and unequal development.

AUTHOR
GABRAHIWOT BAKADAGN  was born in Ethiopia c. 1886 and died in 1917 and was a medical doctor who was one of a group attending the ailing Emperor Menelik. He also served as Nagadras (chief official for commerce) in Dire Dawa.