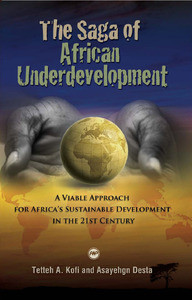 The Saga of African Underdevelopment examines in careful detail the economic conditions in Africa during the pre-colonial and colonial periods. The authors argue eloquently that most of the development paradigms that were used to transform African economies, under free trade imperialism or under colonial and postcolonial periods were incompatible with the African system of thought and traditional production systems or mode of production. Following this, they propose a bold development strategy to reverse the dismal economic performance of African countries in the post independence period. This new development model/policy is based on people-centered approach to economic development similar to the model that Finland implemented in 1899, dubbed the “Pellervo cooperative model”, which transformed the country’s agrarian economy into its industrialized economy of today. The Fins were able to raise the educational level of small farmers by using cooperative societies to raise the skills of small farmers not only in agriculture but also in small industries involved in dairy and related products. In summation, the proposed development model is presented by the authors as the vehicle by which to raise adequately on the African continent the level of human capital development among small producers in the agricultural sector whilst encouraging small cooperative investments in industries. This strategy would rescue the African continent from some of its inappropriate models of development and put the continent on the right path.

“Desta and Kofi propose a path by which African economies can get past the usual disaster of stagnation and dependence on external interests.”
— Patrick Manning, Ph.D., Andrew W. Mellon Professor of World History, University of Pittsburgh

“The Saga of African Development questions the present models of economic development in Africa and presents viable alternatives that promise sustainable economic growth and better lives for the mass of this vast continent’s citizens. This is a must read for policy makers and all those interested in promoting greater equality and environmental integrity in our global society.”
—Martin Carnoy, Ph.D., Professor of Economics of Education, Stanford University

ABOUT THE EDITORS
Tetteh A. Kofi is Professor of Economics at University of San Francisco. He holds a PhD in Economic Development from the University of California at Berkeley and has been a consultant for various international organizations including the United Nations, the Food and Agricultural Organization (FAO), the Economic Commission for Africa, (ECA), UNCTAD and the World Bank as well as the government of his home country, Ghana.

Asayehgn Desta is the Sarlo Distinguished Professor of Business Economics at the Dominican University of California. He also serves on the faculty of San Francisco State University. Prof. Desta earned his PhD. at Stanford University in International Development with emphasis in Economics of Education. He is the author of several articles and books. The Compton Foundation and Friedman's Fund for innovation Competition awards are among the prizes Prof. Desta has won in his distinguished academic career.