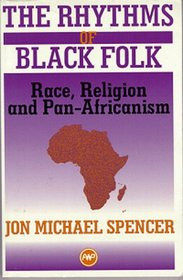 In this book, Jon Michael Spencer argues that African rhythm, particularly African rhythm in the New World, gives rise to the distinctive qualities of black cultures. These rhythms especially undergird and distinguish black music, dance and religion, each of which is a means by which Afro-peoples absorb these rhythms and concretize them in other aesthetic ways. Since black music has been the primary carrier of African rhythms (both black religion and dance are dependent on black music), Spencer contends that it is from black music that black people glean what he calls "rhythmic confidence," a phenomenon he describes as essentially equivalent to "soul." He explains how this rhythmic confidence is sometimes casual and calm and at other times explicit and insurgent, such as in rap music. Spencer's intent for reading the cultural history of Afro-peoples through this rhythmic lens is to clarify the cultural relationship people of African descent have to one another.

"For nearly the last decade, Jon Michael Spencer has diligently labored in the vineyards of African-American scholarship, becoming one of the most prolific and provocative intellectuals of our generation. Now, with The Rhythms of Black Folk, Spencer turns his talented and insightful gaze to the problematic of black racial identity, especially as it embodies the intersection of African and American cultural elements, yielding a rhythmically and culturally nuanced pan-Africanism.

By positing 'rhythmic confidence' as the context of connections between black Africans and Black Americans, Spencer provides an invigorating engagement with social, cultural, sexual and political forces that shape and express Afro-culture. At the same time, he avoids the pitfalls of base essentialism by acknowledging the specific historical dynamics that gave rise to the musics, religions and identities he so deftly interrogates.

Spencer's scholarly canvas is broad - from spirituals to rap, from the social gospel movement to black consciousness currents, from blues to rap sexualities, and his intellectual brush is colorful and evocative. The book is certain to provoke extensive and heated debate about the legitimate prospects of a culturally based, non-essentialist pan-African racial identity. Spencer has done it again!"

"In The Rhythms of Black Folk, Jon Michael Spencer presents traditional African rhythm as the unifying force that can unite Afro-peoples throughout the Diaspora. For those of us who have known its power through the heart, it is exhilarating to explore it through the spirited intellect of Brother Spencer. His excellent scholarship and obvious passion for his groundbreaking work, makes it clear that our music is not only food for the soul, but the foundation of the struggle!"

-Pearl Cleage, Author of Deals with the Devil and other Reasons to Riot

ABOUT THE AUTHOR
JON MICHAEL SPENCER is a professor in the Curriculum for African and Afro-American Studies at the University of North Carolina at Chapel Hill. He is the author of numerous books, including Protest and Praise: Sacred Music of Black Religion, Blues and Evil, and Sing a New Song: Liberating Black Hymnody.