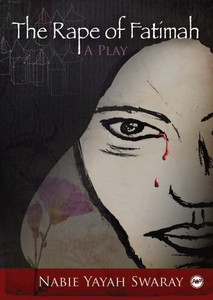 This play is set in Kissy Mess-Mess, a village in the eastern region of Sierra Leone, where the Kissy Mental Hospital is located. Although the sinister events of rape, incest, ritual murder, witchcraft, black magic, political corruption, mysterious death and decay took place in the 1950s, Sierra Leone has not remained free from such cruel, savage, barbaric and inhuman behavior.

Before the movie Blood Diamond, Nabie, with his prophetic mind and vision, and at a surprisingly very early age (the play was written in 1976) was quick to foretell in this dramatic and stage-worthy play, the coming catastrophe that later engulfed his native land, Sierra Leone, in a bloody and savage civil war. The Rape of Fatimah is a metaphor and allegory for the rape of Sierra Leone and the innocent young girls, who like Fatimah, lost their virginity in the most violent and inhumane way. Let the play speak for those victims: For murder, though it has no tongue, will speak with the most miraculous organ.

I can describe without reservation that The Rape of Fatimah is one of the best plays to have come out of Sierra Leone. It is very highly regarded and has been produced to great acclaim on several occasions.

Nabie's literary style is as admirable as the insights that he brings to the issues he raises.

I have read The Rape of Fatimah...which I regard as a very fine piece of work. The play's success in performance in Boston reflects the way in which it manages to take issues, action and themes from his home country and develop them dramatically in a way that makes them available not only to a Sierra Leonean audience (or, more narrowly, and audience from his region of Sierra Leone) but to any audience

In another sense, the ritual murder functions as a metaphor for the destructiveness of a kind of political power that borders on madness. Although the specific incident dramatized in this play took place in 1950, Swaray sees ritual murder as a metaphor for contemporary Africa. What he presents us, then, is a continent which has become corrupted in all senses of the word. Young men have become new "governors" and are busy using their positions to enrich themselves. Religion has been reduced to superstition. And because the society presented here can no longer fall back on traditional values, it moves about confused. Is there a cure for this corruption and the collapse in human relationships it entails?"

ABOUT THE AUTHOR
NABIE YAYAH SWARAY is a Harvard educated playwright, who began his career as a young pantomimist. In 1993 he became the first African to win a major grant in playwriting given by the National Endowment for the Arts. He obtained an MFA from the University of Iowa's Writers Workshop, and has authored many plays, novels and a book of short stories. He now lives in Bowie, Maryland, where he continues to write and teach.