THE PROVOCATIONS OF AMNESTY: Memory, Justice and Impunity, Edited by Charles Villa-Vicencio and Erik Doxtader 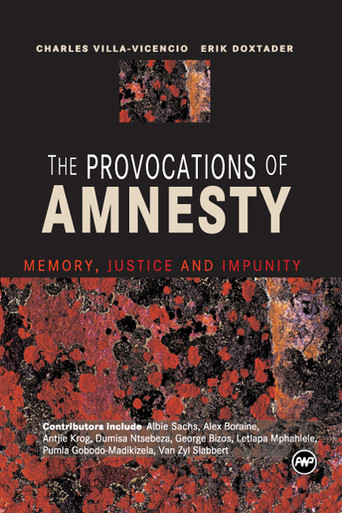 THE PROVOCATIONS OF AMNESTY: Memory, Justice and Impunity, Edited by Charles Villa-Vicencio and Erik Doxtader

A key event in South Africas recent past was the granting of amnesty through the Truth and Reconciliation Commission. This thought-provoking collection of essays explores issues such as:

· Was amnesty in South Africa a political compromise?
· What are the advantages of truth commissions versus legal trials?
· Who decided who was granted amnesty and on what grounds?
· How do the victims feel about the truth commission process?
· Did the amnesty process make a meaningful contribution to reconciliation?

ERIK DOXTADER is an assistant professor of rhetoric at the University of Wisconsin-Madison. He is a Senior Research Fellow in the Institute for Justice and Reconciliation.