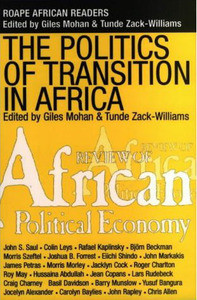 The Politics of Transition comes out of a new Review of African Political Economy (ROAPE) series of multidisciplinary readers, organized as teaching texts around themes central to African studies and development. Each volume will have guides to further reading and glossaries of frequently used or technically complex terms.

Contents include: Introduction: The Theories of the State/the State of Theories – The Unsteady State: Uganda, Obote & General Amin by John S. Saul – The ‘Overdeveloped’ Post colonial State: A Re-evaluation by Colin Leys – Imperialism & Capitalist Transformation: Critique of a Kenyan Debate by Bjorn Beckman – Political Graft & the Spoils System in Zambia: The State as a Resource in Itself by Moriss Szeftel – The Military State & Ethiopia’s Path of ‘Socialism’ by John Markakis – Warlords & Militarism in Chad by Roger Charlton & Roy May – Transition Politics & the Challenge of Gender in Nigeria by Hussaina Abdullah – No Shortcuts to Democracy: The Long March toward Modernity by Jean Copans – The Crisis of the Nation-State in Africa by Basil Davidson & Barry Munslow – Structural Adjustment & the Political Question by Yusuf Bangura – Who Needs Civil Society? By Chris Allen – Glossary

ABOUT THE EDITORS
GILES MOHAN is a lecturer at the Open University.

TUNDE ZACK-WILLIAMS is professor of sociology in the Department of Education and Social Science, University of Central Lancashire.