THE ORIGIN OF RACES AND COLOR, by Martin R. Delany 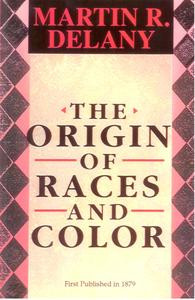 THE ORIGIN OF RACES AND COLOR, by Martin R. Delany

Of the books authored by Martin R. Delany (1812-1885), The Origin of Races and Color is perhaps the most obscure. Out-of-print until now, it has been available to the public only through select libraries. At the time of its publication in 1879, The Origin of Races and Color presented a bold challenge to racist views of African inferiority. Martin Delany wrote in opposition to a developing oppressive intellectualism that used Darwin's thesis, "the survival of the fittest," to support its demented theories of Black Inferiority.

Skillfully blending biblical history, archeaology and anthropology. Delany offered evidence to the "serious inquirer" suggesting the first humans were African, and that these Africans were "....builders of the pyramids, sculptors of the sphinxes, and original god-kings...." With such radical assertions, Delany advanced a model of ancient history that contradicted the very foundation of intellectual racism. Delany looked at the history of the world and saw Africa at its center. He believed knowledge of one's past was essential, and that it could provide Black people with the regenerative force necessary to inspire their self=improvement. Were he alive today, Delany would certainly feel at home with the present generation of Africancentrists, especially since he developed and articulate so many of their arguments more than a century ago.

In addition to providing the reader with an opportunity to more completely examine the writings of Marin Delany, The Origin of Race and Color remains a valuable resource, documenting the continuity of Black radical philosophy.