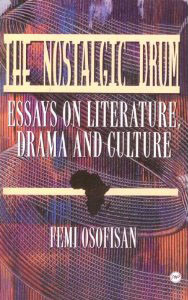 This is the first collection of the essays of Femi Osofisan, the internationally recognized Nigerian dramatist, poet, and scholar, who is widely hailed as the leading writer in Africa. He belongs to the generation following that of Wole Soyinka and Chinua Achebe. His essays have appeared over the years in journals and magazines, some of which have unfortunately ceased to be published. It is a great boon to scholars of African literature to have these essays under a single cover now.

Often with acerbic wit and idealistic fervor, but always with the sympathetic understanding expected of an active and committed practitioner, Osofisan speaks about the vicissitudes of literature and of those who produce and consume it in a troubled post-colonial Africa. He uses an astounding map of references ranging from Euro-American to Asian to Latin American literary sources. The result is a passionate and original insight into not only the works of his contemporaries, but also into the adventures of Africa since the latter half of the last century. He also illuminates lucidly his own “aesthetics of revolt.”

In addition to the essay titled “The Nostalgic Drum,” other essays included in this collection are “Beyond Translation: A Comparative Look at Tragic Paradigms and the Dramaturgy of Wole Soyinka,” “The Alternative Tradition: A Survey of Nigerian Literature in English since the Civil War,”  “The Saga of Clarkand  the Trail of Ozidi: A Review of J. P. Clark’s The Ozidi Saga,” and “Domestication of an Opiate: Western Paraesthetics and the Growth of the Ekwensi Tradition.”

Femi Osofisan has taught, directed and had his plays performed in several countries including Australia, Canada, Germany, Sierra Leone, Jamaica, USA, Sri Lanka, United Kingdom, and Ghana. Author of over fifty plays, two children's books, three novellas, and four collections of poetry, Osofisan has also worked in journalism and has been a popular columnist in a number of Nigerian newspapers. He has been the President of the Association of Nigerian Authors and is currently the Vice President (West Africa) of the Pan-Africa Writers' Association. Osofisan is the winner of many national and international prizes, both for poetry and especially drama.