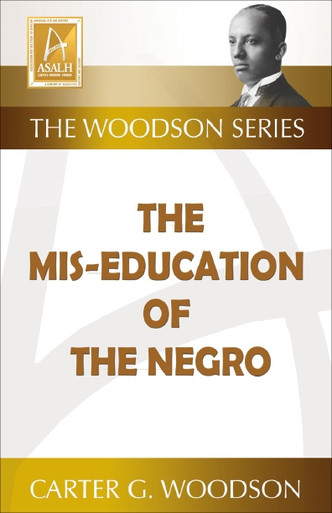 Carter Godwin Woodson is considered by many to be the father of African-American history. The son of former slaves, in 1912 Woodson earned his Ph.D. in history at Harvard University, the second African-American to earn a doctorate – the first being W. E. B. DuBois.

Noting that African-American contributions “were overlooked, ignored, and even suppressed by the writers of history textbooks and the teachers who use them,” in 1926 he originated the concept of Negro History Week, which he set in the second week of February – which coincided with the birthdays of Abraham Lincoln and Frederick Douglass. That week of recognition soon became largely accepted, and was eventually extended for the full month of February – becoming known as Black History Month.

The material that makes up The Mis-Education of the Negro was originally a series of speeches and essays delivered and written by Woodson in the late 1920s and early 1930s, but which he collected into book form in 1933. It is still considered a classic piece of African-American writing and is widely in high school and college classrooms.