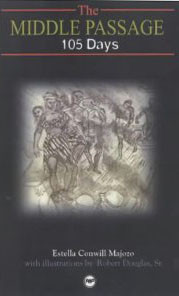 In The Middle Passage: 105 Days, Estella Conwill Majozo returns after her award-winning autobiography, Come Out the Wilderness, to delve into the awesome voyage of her captured ancestors. Many accounts of the Middle Passage have been verbalized and visualized through fiction and non-fiction, such as Charles Johnson’s Middle Passage and the historic description of the Amistad Revolt. Other accounts include Margaret Walker’s Jubilee, which chronicles the genius of African struggle against formidable odds, and Alex Haley’s Roots, which describes the brutal subjugation of the African flesh and spirit. Also, Toni Morrison’s Beloved features the unrelenting resistance against slavery’s continuing horrors, and the work of Tom Feelings portrays through deftly drawn lines and subtle renderings the horrors and courage endured during those dark days for many Africans. Yet, the story of the countless millions of enslaved Africans cannot be told enough times or in too many different ways.

In this poetic narrative, Majozo communes with her ancestors to conjure up a memorable primal cadence that conveys the anguish, sorrow, suffering, and triumph of the people despite the oppressive conditions of the Middle Passage. Robert Douglas’ drawings also illustrate Majozo’s narrative imagery creatively and are sensitive and passionate portrayals of Majozo’s poetic expressions.

ABOUT THE AUTHOR
ESTELLA CONWILL MAJOZO is a Professor of English at the University of Louisville. Her published books include Come Out the Wilderness: Memoir of a Black Woman Artist, Jiva Telling Rites, and Libation: A Literary Pilgrimage Through the African American Soul. Working as part of an interdisciplinary collaborative team of artists which includes her brother, sculptor Houston Conwill, and architect, Joseph DePace, Estella Conwill Majozo has helped create permanent public art monuments at such venues as the African Burial Ground in New York, Yerba Buena gardens in San Francisco, The New Harold Washington Library in Chicago, and various sites along the Underground Railroad in the US and Canada.