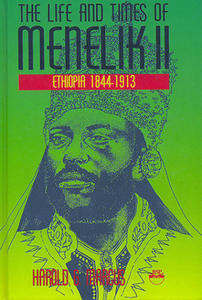 Of all the major African countries only Ethiopia successfully defeated late nineteenth-century European imperialism. To a considerable extent this was due to the political and military genius of Menelik II. This study of the Emperor's long reign helps to explain Ethiopia's survival; it also reveals Menelik as the man who earned through programs of expansion and modernization which led tot his creation of the Ethiopia of today. This is the most substantial contribution so far in an inexplicably neglected aspect of African history.

ABOUT THE AUTHOR
HAROLD G, MARCUS, distinguished Professor of History and African Studies at Michigan State University, is the author of The Modern History of Ethiopia and The Horn of Africa, Haile Sellassie I: The Formative Years 1823-1936 (RSP, 1995), and The Politics of Empire: Ethiopia, Great Britain, and the United States, 1941-1974 (RSP, 1995).