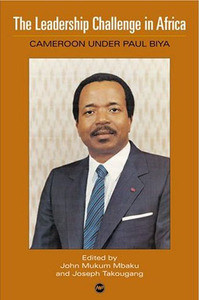 This book is written by an outstanding group of scholars, all of whom have a genuine and longstanding interest in peace and social justice in Cameroon. It makes a significant contribution to the debate on poverty alleviation in Cameroon, the country’s stalled transition to democratic governance, identity and citizenship and the equitable allocation of resources.

The Leadership Challenge in Africa contains the refreshing, rigorous, and informative analysis of the Biya regime, opposition politics, as well as the Anglophone problem and provides practical strategies to enhance peaceful co-existence and sustainable development in the country. It emphasizes the importance of enfranchising the Cameroonian people and providing them with the facilities to determine how they want to be governed and how their resources should be allocated.

ABOUT THE EDITORS
JOHN MUKUM MBAKU is professor in the Department of Economics at Weber State University. He is the author of Institution and Reform in Africa: The Public Choice Perspective and Bureaucratic and Political Corruption in Africa: The Public Choice Perspective. He is also the editor and co-editor of numerous books including, Corruption and the Crisis of Institutional Reforms in Africa, Preparing Africa for the Twenty-First Century: Strategies for Peaceful Coexistence and Sustainable Development. He is the Associate Editor of the Journal of Third World Studies.

JOSEPH TAKOUGANG is associate professor of history in the Department of African-American Studies and the director of the African Studies Program at the University of Cincinnati. His articles have appeared in several scholarly journals, and he is the co-author of African State and Society in the 1990s: Cameroon’s Political Crossroads.