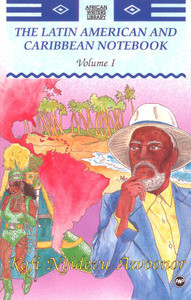 Awoonor's earlier collections, Rediscovery (1964), Night of My Blood (1971), Ride Me, Memory (1973), The House by the Sea (1978), Until the Morning After (1987)-- firmly established him as one of the finest poets writing in the English language today. His special gift to the world of letters is the exceptional finesse with which he weaves the rhythmic and metaphorical power of Ewe and other African traditions into his English language poetry. His new collection, Latin American & Caribbean Notebook, offers us this same blessing, and much more. It is a rare poetic commentary on contemporary global relations perceived from the privileged position of an African artist-diplomat in Latin America and the Caribbean. Beyond the lyrical power of most of these poems, there is evidence of Awoonor's great linguistic versatility. With remarkable success, he achieves a new poetic medium that draws on his knowledge of several languages and cultural traditions-- Ewe, Akan, English, Portugese, Spanish. The impact of his poetic synthesis is as exciting as it is challenging." -Kofi Anyidoho

ABOUT THE POET
KOFI NYIDEVU AWOONOR was born in eastern Ghana. he was educated in the Catholic and Presbyterian Primary Schools of Dzodze and Keta, and later at the Zion College, Angola and Achimota School. He holds degrees from the University of Ghana and London, and the State University of New York. He was professor of English and Comparative Literature in SUNY at Stony Brook, and Professor of Literature at the University of Cape Coast, Ghana. Ambassador Awoonor is currently Ghana's representative to the United Nations in New York. His novel, Comes the Voyager At Last, was published by African World Press in 1991.