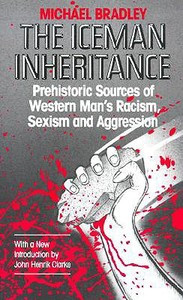 Bradley delves back into the Ice Age to find prehistoric sources of the white race's aggression, racism and sexism. The author offers a persuasive argument that the white race is more aggressive than other groups. And in tracing the effects of the aggression, Bradley offers an uncomfortable all-too-plausible explanation for the pattern of human history.

The Iceman Inheritance is shocking, it is racist...but is it true? A new introduction by Dr. John Henrik Clarke, historian, expands on the findings of Bradley citing other grave proofs that the aggression of the white race has been the cause at the root of much of the destruction of early African and Eastern civilizations.

AUTHOR
MICHAEL BRADLEY lives in Canada, and is a descendant of the first non-white Post Master General, Andrew Jackson Hunt, a distant relative of Sequoiah, great Cherokee Indian chief. He is the author of nine other published books, including Dawn Voyage: The African Discovery of America, originally published as The Black Discovery of America.