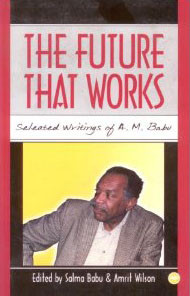 Abdulrahman Mohamed Babu was a writer, revolutionary and politician. He led the 1964 Zanzibar revolution and was a cabinet minister in Tanzania until 1972 when he was imprisoned by Nyerere. He was eventually released six years later with the aid of an international campaign. Babu taught at San Francisco State University and Amherst College and later moved to London at Birkbeck College. He became a friend and source of strength to struggling peoples all over the world, and he continued to play a unique role in African politics. In the face of the intensifying economic stranglehold and ideological dominance of Western agencies, he spoke and wrote of the need for a “second liberation” of  Africa. A committed Marxist, he was a passionate believer in  a socialist Pan-Africanism.

Spanning almost forty years of the remarkable life of A. M. Babu, these seminal essays and witty articles, together with inspirational speeches delivered on various occasions, cast a clear and analytical light on many key political events and processes in Africa and elsewhere--and they suggest ways in which to move forward.

The book is organized around several interlinked themes:

·        National liberation in the era of neocolonialism

“It was his belief in the power of the people that clearly stands out… Babu still lives in our every effort to bring about social justice in Africa and the world.”

“ He never stopped thinking of how to change life and society as it is lived… the everlasting impression one is left with is an uncompromising zest for life, of an unending quest in every realm, personal as well as political.”

“Some of us, mainly academics, try to analyze those events and spoke speak of a renaissance of Africa and a new world. I think Babu analyzed not only where we stand today but on what conditions national liberation can move ahead.”

Salma Babuis one of the daughters of A.  M.  Babu. She is an activist based in London.

Amrit Wilsonteaches at the University of Luton and is part of its Race and Gender Research Unit. Her books include US Foreign Policy and Revolution the Creation of Tanzania, The Challenge Road–Women and Revolution in Eritrea and Finding a Voice–Asian Women in Britain.