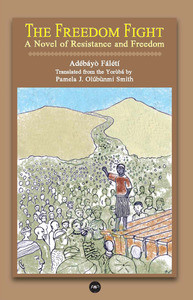 Pamela Olúbùnmi Smith's The Freedom Fight is an English translation of Adébáyò Fálétí’s Yorùbá novel, Omo Olókùn Esin Though written in 1958 to coincide with Nigeria's Independence (celebrated on October 1st, 1960), Omo Olókùn Esin was first published in 1970, long after the novel had gained pre-eminence in Yorùbá letters. Fálétí's imagination was captured by a consuming interest in how people would have liked to have expressed the "self government now or never!" slogan that rent the air in the decade before formal negotiations for independence were begun. Set in 19th century traditional Yorùbáland, The Freedom Fight is an historical tale about feudalism and enslavement, freedom and independence. It chronicles the attendant frustrations of advancing any kind of liberation movement in a rule-of-fear, exploitive system, sanctioned by traditional authority. Àjàyí, the idealist son of Chief Olókùn-Esin, mounts a violent revolt against the injustices of enslavement and feudal practices. He eventually wins freedom and independence for the people of Òkò from years of servitude under Olúmokò, signaling the beginning of the end of feudalism in Yorùbáland. An unrivalled eloquent marker of a historical and linguistic age gone by, Omo Olókùn Esin remains the longest novel and sole example of the revolutionary novel sub-genre in Yorùbá literary corpus. More than a work of literature, this English translation affords the modern reader a primer of Yorùbá culture.

An original text in Yorùbá written in 1958 and printed in English in 2010 has united the wisdom of Bàbá Fálétí, the literary icon, with the sagacity of Olúbùnmi Smith, the distinguished translator and preeminent scholar, to bring a vibrant piece of literature to a wider audience, reminding us of that lost moment in African history when the air was filled with the magical spirit of hope and aspirations, promises and desire, joy and jubilation. If the text reminds us of the necessity of freedom, the ever-green lesson is that we must continue to put oil in the lamp that supplies the light and vision to transcend the current moment so that the imaginary future can become a reality -- the revolution now has to happen for the nation to be reborn.
--Tóyìn Falola
University Distinguished Professor, University of Texas at Austin and the Mwalimu Julius Nyerere Chair of Modern African History At-Large, Benue State University, Nigeria

ABOUT THE TRANSLATOR
PAMELA J. OLÚBÙNMI SMITH is Professor of English, Humanities and Women's Studies at the University of Nebraska at Omaha.  She holds a doctorate in Comparative Literature from the University of Washington, Seattle and has published several essays on translation issues and on Yorùbá Language and Literature. Africa World Press published her translations of Akínwùmí ÌSölá's two historical plays, Ëfúnsetán Aníwúrà and Olú Omo Tinúubú in 2005.