THE ETHIOPIAN PEOPLE'S REVOLUTIONARY PARTY: Between a Rock and a Hard Place, 1975-2008, by Solomon Ejigu Gebreselassie 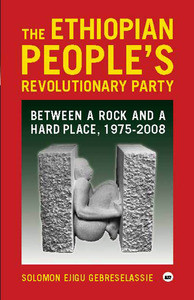 THE ETHIOPIAN PEOPLE'S REVOLUTIONARY PARTY: Between a Rock and a Hard Place, 1975-2008, by Solomon Ejigu Gebreselassie

This book is about the 30 year journey of the Ethiopian People's Revolutionary Party (EPRP) in the political landscape of Ethiopia. In 1975, the party emerged by spectacularly dashing onto the revolutionary stage in almost all parts of Ethiopia, only to see it unglamorously disappear from the urban stage 4 short years later. The book tries to partially answer why that was so. The book then traces the paths of the party and its army in rural Ethiopia, from Tigrai to Gonder, Tselemt, Wolkait and finally Quarra. It explores the internal dynamics that unraveled the army, its subsequent stabilization, and its golden years in Quarra where the party finally got a chance to implement its socio-economic goals and improve the livelihood of the locals. Operating between the rock of the Dirgue and the hard place of TPLF's ethno-nationalism, the party's golden years would not last long. The book documents women's specific role in this journey, and concludes by narrating EPRP's contributions in Diaspora united front politics. Summing up the 30 year experience of EPRP and other political forces, the book ends by emphasizing the call for national dialogue and reconciliation among Ethiopia's political forces.

Solomon Gebreselassie’s book, EPRP: Between A Rock and A Hard Place A Brief History of the Ethiopian Peoples Revolutionary Party, as its name suggests, is about the complicated and complex history of the Ethiopian Peoples Revolutionary Party, a party that spearheaded the initial post-1974 Ethiopian peoples’ uprising. The book is a powerful narrative of the EPRP experience in general and the encounters of the last contingents of the EPRA in the Gondar and Gojjam areas and that of the Ethiopian Peoples Revolutionary Youth League in Urban Ethiopia. The author cogently and objectively writes to authenticate the struggles waged by the EPRA combatants, and this gives originality to the authors’ compilation of data compared to other previously written books on the same subject. I have enjoyed reading the book, and without doubt it is a great addition to the many books on the EPRP.

SOLOMON E. GEBRESELASSIE was an irrigation technician at Awash Valley Authority in 1976 during the Dirgue regime. When an unsuccessful strike called by EPRP-affiliated labor unions in September that year demanding the formation of a civilian government failed, he went underground and then left for rural Tigrai and Gonder. He came to the USA via Sudan in 1982 and completed studies in petroleum engineering for a first degree and philosophy for an advanced degree. He lives in Los Angeles with his wife, and is a father of two kids. His research interests include the policies and practices of contemporary social democracy, epistemology and literary criticism. He has written two books, and this is his third.