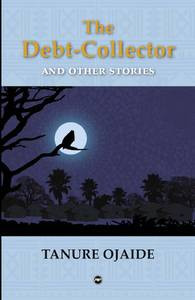 The Debt-Collector and Other Stories deals with African reality from traditional to modern times. The ten stories are snapshots of human experience told from different perspectives and covering the vast stretch of society. They range from the origin of witchcraft, debt-collecting in the olden days and the marriage of descendants of hostile families, through the appearance of a military officer presumed dead in a plane crash, to the humanity of a feminist and a pastor. They are stories which affirm that the unthinkable can happen, the imagined could be real, and the real could be fantastical. The stories portray characters and incidents that depict humanity as fragile before fate and asserting one’s humanity becomes the ennobling pursuit of all.

A contemporary view of Nigerian society, ranging from the cultural to the politically mundane, in which life is depicted as an urgent drive towards social expediency, while at the same time offering the readers a kaleidoscope of a people still deeply susceptible to the whimsical nature of charlatan prophets, myths, family extortionists and, occasionally, the real determinants of an elusive moral code. In this collection, Tanure Ojaide’s objective is to present a society too complex to be monolithic; too varied to be easily understood and, more interestingly, full of unrelieved drama and the bizarre. Nothing is too trivial or merely anectodal here. Everything is real; the ties that bind families are old but also tenuous, when put to the test. This is surely an exciting collection that will arrest every reader’s attention.
—Syl Cheney-Coker, veteran poet and author of The Last Harmattan of Alusine Dunbar

The Debt-Collector and Other Stories, Tanure Ojaide’s second collection of short stories, clearly establishes his place in the rank of the best practitioners of the genre. Like his first, this collection resonates realistically with its setting, portraying with a freshness of insight familiar themes of Nigerian life. Ojaide is at his best crafting love stories and these dominate the collection. Employing a linguistic style that is always reflective of the Nigerian setting, as attested in the pidgin dialogues in some stories, Ojaide purposely makes narrative language unobtrusive in order to give plot, which is deftly woven, maximum visibility, hence the stories have a gripping hold on, and an insatiable interest for, the reader.
—F. Odun Balogun, Professor, Department of English Delaware State University

ABOUT THE AUTHOR
Tanure Ojaide’s literary awards include the Commonwealth Poetry Prize for the Africa Region, the All-Africa Okigbo Prize for Poetry, and the Association of Nigerian Authors Poetry Award. His first novel, Sovereign Body, was a runner-up for the Commonwealth Literature Prize for the Africa Region in 2005. His other fictional works include God’s Medicine Men (2004) and The Activist (2006). He teaches at The University of North Carolina at Charlotte.