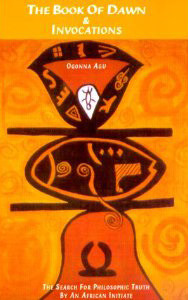 From the background of African traditions there appears to be much similarity between many indigenous African traditions and the civilisation of Ancient Egypt. I was fascinated by the discovery that much of Igbo traditions expressed somewhat similar views like those we find among the ancient Egyptians ... Igbo cultural tradition is one such culture. Jeffries in his studies of the Nri-Igbo traditions of Nigeria shows a cluster of ideas such as belief in the Sun God Chukwu, the winged solar disc which forms the model of the Nri-Igbo facial scarification; the ram-headed god Ikenga, etc. Igbo religious outlook deals mainly with the world of nature which is of particular interest in these days of our awareness of the harm done to the environment, and more importantly, humanity is seeking to return to the religion and philosophy of nature. So also do we deal with religion as a social model to which the entities must adhere. Thus Chukwu is seen as an entity with hands and feet, an elder who takes titles (such as Ezechukwu, Ezechukwuoke, etc.) and wears a hat with eagle featers.