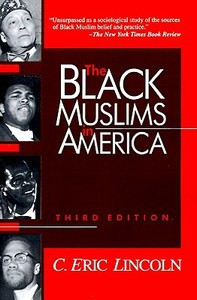 Hailed as "one of the best technical case studies int he whole literature of the social sciences" upon its original production in 1961, The Black Muslims in America in this third edition provides a new generation of readers with an enriched, up-to-date knowledge of the important but little-understood Black Muslim movement.

This classic sociological study gives a concise, accessible introduction to Islam for Americans whose knowledge of religion is limited primarily to Judeo-Christianity. The book succinctly details the formation and development of the Black Muslim movement through its wide-ranging expressions in America today-- a movement born as an organized form of religious and social protest against a society sharply divided by race.

This edition includes a new foreword by Aminah B. McCloud, a new preface, and an extensive postscript by Lincoln in which he outlines the course of the Nation of Islam since the death of its formative leader, Elijah Muhammad, in 1975-- the sweeping changes wrought by Elijah's son and successor, Wallace Deen Muhammad, the disintegration of the Nation into splinter groups, and the emergence of Louis Farrakhan as the legitimate head of the "new" nation. A section highlighting the public career of Malcolm X, Elijah Muhammad's famous spokesperson turned cultural icon, is also included.

In the wake of recent media events like the film Malcolm X and unsettling national events like the riots in Los Angeles, this timely update provides both fascinating reading and challenging reflection about an American religious group still shaping its destiny, and that of the nation.

"The Black Muslims in America established a genre of analysis that has since seen many imitators. C. Eric Lincoln's style is precise; his approach is scientific, and his arguments are cogent. This work will long remain one of the standard examples of how to discuss religious organization." -Molefi Kete Asante, Temple University

ABOUT THE AUTHOR
C. ERIC LINCOLN is professor of religion and culture at Duke University, Durham, North Carolina. In 1990 he was cited by Pop John Paul II for his "scholarly service to the church." His numerous books include Race, Religion, and the Continuing American Dilemma.