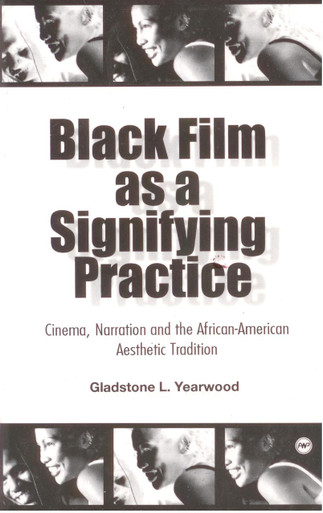 In Black Film as a Signifying Practice, Galdstone Yearwood explores cinema as part of the black cultural tradition. He argues that black film criticism is best understood as a 20th century development in the history of African-American aesthetic thought, which provides a substantive and accumulative aesthetic and critical tradition for black film studies. The book examines the way black filmmakers use expressive forms and systems of signification that reflect the cultural and historical priorities of the black experience. It delineates how the African-American expressive tradition utilizes its own vernacular space and time for story telling in the cinema and how black film narration draws on the formal structures of black experience to organize story material.

Yearwood focuses on signifying practices in the cinema and the symbol-producing mechanisms that inform black filmmaking.The book proves valuable insights into the narrational processes at work in African-American expressive forms and in black culture. Using the frameworks of an Afrocentric model, Black Film as a Signifying Practice moves away from a preoccupation with black film as defined by the dominant society to emphasize how the expressive strategies and cultural mechanisms that have been critical to black survival influence in black filmmaking.

Part one represents an overview of black film and an introduction to black film culture. It surveys the emergence of the black independent film movement from the perspective of the black cultural tradition, and it presents a critique of the major theories, concepts and issues that have shaped the history of the black independent film movement. Part two undertakes an intensive examination of problems in black film narration through an analysis of selected films. Black Film as a Signifying Practice is a useful resource for students of film studies, African-American studies, cultural studies, and the arts.

Gladstone L. Yearwood is an associate professor of Film and Director of the African-American Studies Program at the University of Central Florida. His publication include Black Cinema Aesthetics: Issues in Independent Black Filmmaking.