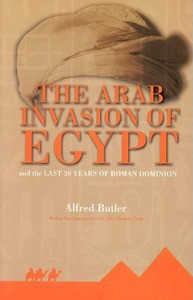 It is significant that Alfred J. Butler's book, The Arab Conquest of Egypt and the Last Thirty Years of the Roman Dominion, first published in 1902, is being republished at this time. The African converts to Islam in Africa and those abroad have at last begun to lose some of their romanticism about the Arabs and Islam and are now asking some pertinent questions about this religion in its original propagators that they should have asked long ago. At least 70 percent of all the Arabs in the world live in Africa. There are more than 127 million Arabs in the world. A statistic that few adherents of the faith have taken into consideration is that there are more Africans who are Moslems who are not Arabs than there are Arabs in the world. New converts to the faith in the United States too often approach this religion as though it is the private property of the Arabs. They fail to take into consideration that the Moslem population of the mainland Asia is larger than the Moslem population of the Arabian peninsula. Now that it is clear that the Arabs are a minority within Islam, it should also be clear that their dominance over this faith and its direction is seriously open to question.

The above explanation is essential to clearing up some of the misconceptions about the Arabs and Islam before examining the significanceof the Arab conquest of Egypt. First, I will ask a question and try to answer it: What exactly is an Arab?