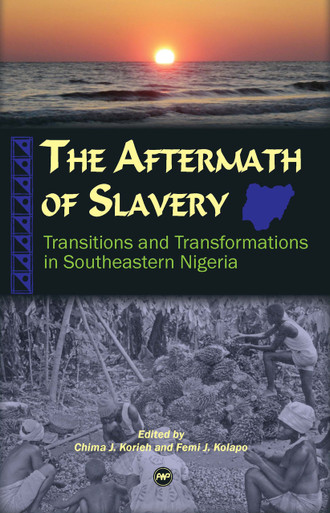 In The Aftermath of Slavery Transitions and Transformations in Southeastern Nigeria the contributors present an in-depth survey of the impact of the abolition of the Atlantic slave trade on the societies of the Lower Niger Basin of Nigeria. The book provides critical perspectives on the economic, social, and political changes that occurred in the region following the abolition of the external slave trade. By adopting various cultural, historical, political, and sociological perspectives, the contributors provide insightful analyses on the changing economic, political, and social landscape of African societies in the aftermath of the Atlantic slave trade. African producers adopted new production relations in response to increased demands for labor required for the production of agricultural goods. Advances were made in the production techniques and technology for the production of palm produce. Improved transportation and haulage systems increased quantities and bulk of supplies. Gender relations of production saw important transformations in response to labor and control of access to productive resources. The book provides new lines of argument that explains the early and close functioning of the coastal middlemen and the immediate hinterland societies with European traders, travelers, observers, and officials during the slave trade era and in the aftermath of slavery in the nineteenth century and offer a fresh look at the broader debate on the impact of the abolition of the slave trade on African societies.

"This is an important micro-study that we so much need in the classrooms. African Diaspora and African History students and their instructors would find it extremely useful."

The Aftermath of Slavery brings together the voices of many young scholars who daringly recast the narrative of the post-abolitionism period by showing the vitality of indigenous processes that contested the hardware of externally-induced political economy. They deploy the resources of the social sciences to re-interpret the so-called crisis of adaptation as actually a welter of internally-generated, creative, transformation in the structures of production, commerce, labor, gender, social underpinnings, and political structures. The editors have knitted the various perspectives into an artistic weave like the akwete cloth.

"Fantastic! This book is a splendid exploration of the internal dynamics of change in the Biafra Hinterland. It is a tour de force. . . . A paradymic shift from Eurocentric to Afrocentric discourse in the context of the slave trade. It is a must read for scholars and students of African social and economic history."

ABOUT THE EDITORS
CHIMA J. KORIEH teaches African History at Rowan University, Glassboro, New Jersey. He has authored over forty articles and essays in journals, books, and encyclopedias and an associate editor of Encyclopedia of Western Colonialism Since 1450 (The Gale Group/Macmillan Reference USA, 2006).

FEMI J. KOLAPO is currently a professor in African History at the University of Guelph, Canada. He had earlier on taught at the Ahmadu Bello University Zaria, Nigeria. One of his major areas of research is the relationship between African peoples and the Christian missions.