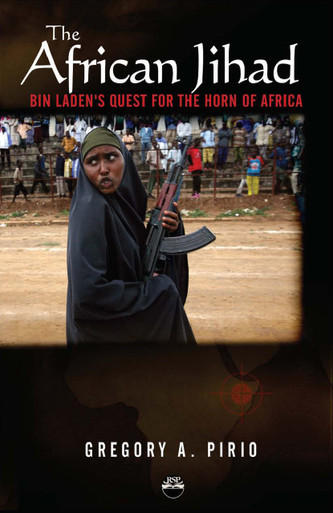 The African Jihad is a fascinating examination of the efforts by international jihadists to bring about their grand vision of Islamist hegemony in the greater Horn of Africa region. These efforts began with the collaboration between Al Qaeda and the National Islamic Front (NIF) government of Sudan. The NIF under the ideological leadership of Hasan al-Turabi and Al Qaeda under Osama bin Laden sought to channel the social, political and economic grievances of Muslim communities into a global jihadist narrative, and the NIF and Al Qaeda worked hand in glove to set up and/or support several, coordinated jihadist movements in the countries of Eritrea, Ethiopia, Kenya, Somalia, Tanzania and Uganda. The combined Al Qaeda-NIF regional onslaught bequeathed a legacy of proxy wars and terrorism against Eritrea, Ethiopia and Uganda and Al Qaeda terror operations in Kenya and Tanzania. Dr. Gregory Alonso Pirio takes the story of Horn of Africa jihadism up to the defeat of Union of Islamic Courts in Somalia by the combined forces of Ethiopia and the Somali Transitional Federal Government in early 2007; Dr. Pirio demonstrates how a faction within Somalia’s Islamic Courts movement with historic ties to Al Qaeda had come to dominate the Islamic Court’s movement and threatened wider regional insecurity and the expansion of the Middle East conflict into Africa.

“The radicalization of Islam is a convergence of two contradictory forces – petroleum in one part of the Muslim world and poverty in another. This volume identifies the shadow of the petro-center (Usama bin Laden) upon the Africanperiphery – the Horn of Africa. Has the Horn become Al Qaeda’s third most important constituency after the Middle East and South Asia? This book may convince you of that.”

“Upon reading The African Jihad, you come away with a clearer understanding of the relentless cycle of violence engulfing the Horn of Africa region. We need leaders to emerge who can articulate a vision of justice, truth and reconciliation that can lead to peace and regional integration. In this way, we Africans can start to put the ways of violence behind us once and for all.”

ABOUT THE AUTHOR
GREGORY ALONSO PIRIO is president of Empowering Communications, a firm dedicated to promoting communications as a constructive force for positive social change, and he is one of the principal promoters of NextAfrica, an all African news and information TV channel. Dr. Pirio was Director of the Portuguese-to-Africa and the English-to-Africa Services of the Voice of America (VOA) where he supervised extensive, in-depth coverage of issues and events of importance to African radio and TV audiences. He holds a Ph.D. in African History and an M.A. in African Studies, and has published academically on issues relating to the history Pan-Africanism, especially the Marcus Garvey Movement.