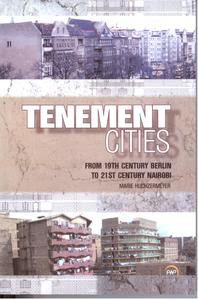 Nairobi today has over 10,000 multi-story tenement buildings, many of them offering single rooms and up to eight stories high. Privately owned and exploiting urban space to the maximum, these bear similarities to housing in rapidly industrializing 19th century tenement cities- New York, Glasgow, Berlin and others. This book explores the emergence of tenement markets across time and space. It focuses on two contrasting cities: Berlin, the largest and densest concentration of tenements in the 19th century, and Nairobi, a city today increasingly shaped by tenement investment that exploits urban space to the maximum, displaying pockets of what may well be the highest residential densities on the African continent.

In examining similar themes in the history of Berlin and Nairobi, Huchzermeyer asks what legitimizes tenement markets over time. She interrogates the role of the late 19th and early 20th century housing discourse in Berlin, within its turbulent context. There is no explicit discourse on Nairobi's present-day tenements. The city's modern urban plans, housing policy and city-region strategy wish tenements away. However, Huchzermeyer finds traces of a pragmatic argument for Nairobi's tenement typology in the approaches that some municipal officials have adopted. This recognizes the convenience and economic buzz of tenement districts and their absorption of unrelenting housing demand. In relation to Nairobi's tenement-dominated context, which is shaped by pragmatism and enterpreneurialism, but also regulatory breakdown, corruption, growing vigilantism and ethnic division amid renewed hope for democratization, Huchzermeyer raises important questions for right to the city.

"This very interesting issue which this book raises is whether the emergence of this form of living is a regression or an improvement in an African city. It does seem to be an economic step up from squatter settlement of the familiar type even in Nairobi. yet these flats seem harsh living still. Does the answer lie in regulating and tireless efforts to improve these tenements?" -Bill Freund, Professor Emeritus of Economic History, University of Kwazulu-Natal, Durban

"This is a new stage in the physical development and morphology of African cities, and needs to be taken into account in research and policy." -Richard Stern, Cities Centre, University of Toronto

ABOUT THE AUTHOR
MARIE HUCHZEMEYER is Associate Professor in the School of Architecture and Planning, University of the Witwatersrand, Johannesburg. She is the author of Unlawful Occupation: Informal Settlement and Urban Policy in South Africa and brazil (AWP, 2004).