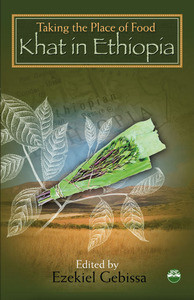 Khat (catha edulis) is a psychoactive shrub whose tender leaves and twigs have been chewed in the Horn of Africa and the Arabian Peninsula for their euphonizing effects for a millennium. A stimulant grown in small gardens for consumption on cultural and religious occasions around the turn of the last century, khat has now become the preferred and most sought-after cash crop, the most visible and pervasive social habit, and an important income-generating occupation for millions of Ethiopians. Within Ethiopia, khat chewing has become a ubiquitous habit, cutting across class, religious, ethnic, and gender affiliations. In addition to satisfying the domestic demand, Ethiopian producers supply fresh leaves to chewers in Djibouti, the Republic of Somaliland, and some Middle Eastern countries. More recently, refugees from the Horn of Africa further spread the custom of chewing to their host nations, including the United States, Canada, Australia, and various Western European countries, opening up new demand for Ethiopian khat.

The growing prominence of khat has prompted various reactions from governments around the world. While khat use is still legal in many countries, there is growing international pressure to impose a ban on its use and trade. The chapters in the current volume articulate the perplexing questions that khat farmers, traders and traditional users raise about the need for such action by showing that khat is not a drug that leaves a trail of destruction in its wake in the form of addicts, criminal traffickers, and corrupt officials. The khat farmer, trader, and majority of chewers are deeply tied to the leaves for historical, economic and cultural reasons. Khat is an integral part of the agricultural systems of nearly all regions of Ethiopia. In the traditional context, khat is used in ritual and habitual ways that exhibit its cultural embeddedness. As a cash crop, it has improved rural life, enabled farmers to become food self-sufficient, and allowed many to move to non-farm occupations, thus relieving pressure on land resources. The revenue from taxes and duties on khat transactions supports government expenditures and development efforts and the cash flow generates multiplier effects in the regions where it is grown.

Ironically titled, Taking the Place of Food, explains that the shift to high-value cash crop agriculture in many parts of Ethiopia represents farmers’ informed and forward-looking response to changing market situations, political adversities, environmental challenges, and family considerations. The shift was inevitable in a situation where no alternative crop that possessed khat’s economic benefits existed. While outlining khat’s economic importance and cultural significance, the chapters in this volume stress that khat production cannot be the foundation for sustainable rural development in Ethiopia solely based on the effort of smallholder producers. As such, it highlights the stark choice between extreme poverty and the allure of a high value cash crop that the farmers face. The country faces a similar dilemma. The chapters in this volume collectively argue that official policy thinking must move away from rural development strategies that perpetuate the doctrinaire assumption that farmers must be helped to become better farmers to emphasizing diversification of the regional economy.

ABOUT THE EDITOR
EZEKIEL GEBISSA, (Ph.D. History, Michigan State), is Associate Professor of History at Kettering University. He is the author of Leaf of Allah: Khat and the Transformation of Agriculture in Harerege Ethiopia, 1875–1991 and editor of Contested Terrain: Essays on Oromo Studies, Ethiopianist Discourses, and Politically Engaged Scholarship. He has published several articles in refereed journals. He is the translator and editor of a monograph, Evangelical Faith Movement in Ethiopia: The Origins and Establishment of the Ethiopian Evangelical Church Mekane Yesus and the current editor of The Journal of Oromo Studies.