SWAHILI MODERNITIES: Culture, Politics, and Identity on the East Coast of Africa, Edited by Pat Caplan and Farouk Topan 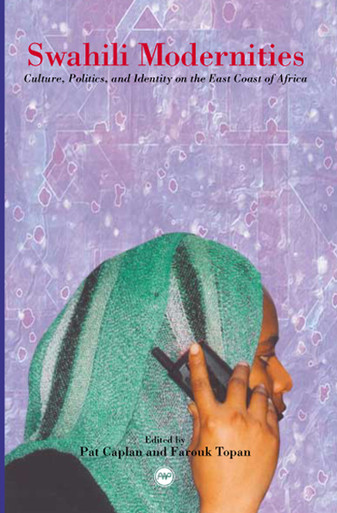 SWAHILI MODERNITIES: Culture, Politics, and Identity on the East Coast of Africa, Edited by Pat Caplan and Farouk Topan

This book considers the themes of modernity, identity, and politics on the East African coast and islands. Currently, this area is undergoing rapid change as globalization makes its impact. Tourism, increased monetisation, emigration from and immigration to the area, and the varying policies of multinational agencies and local states are all significant factors. These chapters reveal some of the ways in which the Swahili seek to maintain their boundaries, even as they adapt their cultural practices to new realities.

Some of the specific issues addressed are the effects of recent economic and social changes in towns such as Bagamoyo and Malindi, the north and south of Mafia Island, and the Comoro Islands. The history of Zanzibar, long a multicultural society which underwent a revolution in 1964 and has recently once again experienced violent political confrontations, is also examined, especially within the context of the tensions which arise when ethnic differences are essentialized and politicized as they have been on Zanzibar.

The volume also focuses on how the Swahili language, literature, and culture have been affected by modernity. The expression of Swahili identity in poetry and song are explored, revealing how recent songs and performance known as taarabu reflect changes in social circumstances as well as shifting audience boundaries. By examining the representation of women in two kinds of Swahili literature, a classical nineteenth century poem and two recent plays, this volume also reveals the strong social constraints under which Swahili womenand others in East Africacontinue to live.

ABOUT THE EDITORS
PAT CAPLAN is a professor of anthropology at Goldsmith College, England. She has published several books on Mafia Island in Tanzania, including Choice and Constraint in a Swahili Community and African Voices, African Lives: Personal Narratives from a Swahili Village.

FAROUK TOPAN is a senior lecturer in Swahili at the School of Oriental and African Studies, University of London. He has taught at the Universities of Dar es Salaam and Nairobi. He is the editor of two volumes of essays on Swahili literary criticism (Uchambuzi wa Maadanishi). He has also published three plays in Swahili.