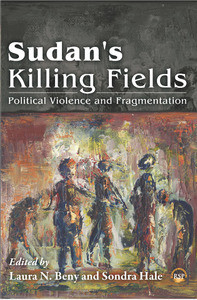 This influential book addresses political violence, racial, gendered and religious conflict, legacies of slavery, crimes against humanity and genocide in the Sudan.  While several prior studies on the Sudan address civil war and political violence within the Sudan’s borders, most of them focus exclusively on a single region, such as the North-South civil war (1955-2003) or the conflict in Darfur (2003-present).  By contrast, this volume comprehensively examines multiple post-independence Sudanese conflicts, as there is a striking similarity in the tragedies befallen upon the marginalized peoples of South Sudan, Darfur, and the Nuba Mountains, among others.  The volume’s multiregional approach demonstrates the interrelatedness of the contemporary conflicts between the center (the state) and the peripheral regions of the Sudan.  It also illuminates possible causes of intra- and inter-peripheral conflicts.

Sudan ambiguously straddles both Africa and the Middle East.  This dual orientation has been a source of persistent conflict, in large part because successive post-independence governments have defined the state as exclusively Arab and Islamic, while sometimes paying lip-service to multiculturalism.  Most of the ethnic groups that reside outside of the "central riverain culture" ("Arab-Nubian core”) have been marginalized by the socioeconomic, cultural, and religious policies of successive governments, culminating in the 1990s with the most extreme policies of the National Islamic Front government (now the National Congress Party).  These policies, which have been biased toward the interests of the center, have threatened the existence of the people and cultures of the periphery and led to political fragmentation.  The non-Arab, often non-Muslim or only nominally Islamic peoples and cultures of the south, west, and east have been variously assaulted, either directly through state (or state-supported) violence or indirectly through neglect and attrition.

The study is critical because of the Sudan’s growing geopolitical significance, which surged when Sudan became an oil-exporting country in 1999.  Furthermore, Sudan is strategically located to offer a window into the conflicts in the Horn of Africa and into the spread of radical Islam in the region.  It was already an area of longstanding interest because of its African and Arab combinations and tensions; its Muslim, Christian, indigenous religious interactions; its complex legal system (with religious, civil, and customary legal systems co-existing); its economic potential; and its dynamic of military-civilian conflicts.  These features make the Sudan a fertile testing ground for numerous inquiries in the areas of (neo-)colonialism, state formation, racism, economic development and exploitation, gender dynamics, human rights, rule of law, constitutionalism, religion and the state, self-determination, and genocide.

Collectively, the chapters address the origins and motives behind the conduct of successive Sudanese regimes, culminating in the most egregious contemporary state.  They present consistent narratives about the social constructions of race, gender, culture, religious and political loyalties–and their intersections–underlying the various conflicts.  At a deeper level, the chapters show how these various identity constructs have served to obscure the Sudanese state’s continuous hegemonic efforts to consolidate political and economic power for the benefit of a small minority.  Major consequences include the secession of South Sudan in 2011 and the ongoing political violence and instability in Darfur, South Kordofan, and Blue Nile.

The volume concludes with a proposal for inclusive state-building that acknowledges the past and prevents future atrocities.

LAURA NYANTUNG BENY, and economist and lawyer, is Law Professor at University of Michigan Law School.  Her scholarly work has been widely published in both economics and law journals, and she has conducted research on Sudan and South Sudan for over two decades.

SONDRA HALE is Research Professor and Professor Emerita, Anthropology and Gender Studies, University of California, Los Angeles (UCLA).  Her oeuvre is based on decades of fieldwork in Sudan and in the Sudanese diaspora and consists of dozens of publications and papers.