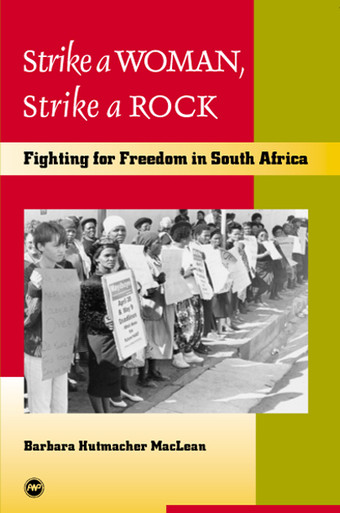 In this trenchant and compelling book, Barbara Hutmacher MacLean reveals the lives of a cross section of South African women who courageously opposed apartheid in ways the world never knew: blacks who risked death and torture by opposing the governments racial laws and whites who openly protested the same policies which gave them privilege.

In the early 1970s MacLean, a journalist from California, arrived in East London, South Africa, to write for The Daily Dispatch. The editor, Donald Woods, was a friend of Steve Biko, a black leader under house arrest in a town nearby. The author spoke with Biko and her husband photographed him, just weeks before his death in prison in 1977. That same year, the author and her husband were ordered to leave the country.

MacLean returned to a new South Africa in early 1998. Building upon contacts, she found women in various parts of the country who had been part of the struggle against apartheid. The women she met told her of the past, the violent years leading to change, their roles in the new government, and their hopes for the future. They spoke from Parliament, from the Truth and Reconciliation Commission, from provincial government, at the site of a womens self-help housing project, in a township school, and from the offices of President Nelson Mandela.

As these women speak to MacLean about their fight for freedom and the struggle against apartheid, it is apparent that South Africa would not have evolved as it has without the firm foundation laid by them.

ABOUT THE AUTHOR
BARBARA HUTMACHER MACLEAN is an award-winning journalist and author of In Black and White: Voices of Apartheid and I Cant Do What?: Voices of Pathfinding Women. She worked for daily newspapers in California, Washington state, South Africa, China, England, and Namibia. Now retired, she and her husband live in Port Townsend, Washington.