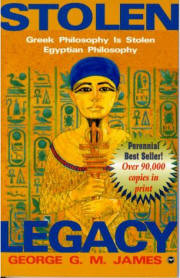 "...the book is an attempt to show that the true authors of Greek Philosophy were not Greeks, but the people of North Africa, commonly called the Egyptians; and the praise and honor falsely given to Greeks for centuries belong to the people of North Africa. Consequently, this theft of the African legacy led to the erroneous world opinion that the African continent has made no contributions to civilizations, and that it's people were naturally backward. This is the basis of race prejudice, which has affected all people of color."
-from the Author's Introduction