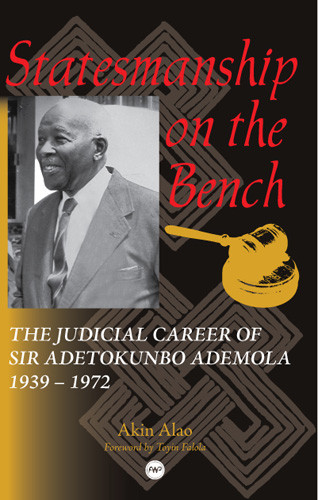 The book examines the judicial performance of Sir Adetokunbo Ademola (1939  1972), vis a vis the inter-relationship of the executive and the judiciary to conceptualize his understanding of judicial independence and the principle of separation of powers. A chronological approach within the context of unfolding historical events revealed that the jurisprudence of Adetokunbo Ademola reflected four major concerns, which invariably coincided with the major phases of his judicial career. As a magistrate and judge under colonial rule, Adetokunbo Ademola was concerned with the need to use the courts as an effective agency of legal control. And, as Chief Justice of the Western Region, he succeeded in separating the interests of the State from that of the political party in government. He was concerned with the need to protect the interest of the opposition in serving as check on the possible abuse of power by the Action Group led government in the Western Region. During the era of parliamentary democracy, the Supreme Court under Adetokunbo Ademola collaborated with the central government to modify the federal constitution thereby bolstering the leverage of the federal government and its capability to arrest centrifugal tendencies of the federating units. In the era of military rule, the jurisprudence of Adetokunbo Ademola reflected a concern for the need to protect individual rights against the excesses of the state as contained in ad hominem laws with retroactive effect. The book examined these concerns and the extent to which Sir Adetokunbo Ademola consistently gave judicial effect to these concerns. The Chief Justice was a strict constructionist of the law and his performance in cases involving the interests of the State portrayed him as both a judge and most importantly, a statesman of considerable stature.

ABOUT THE AUTHOR
AKIN ALAO earned his Ph.D. in legal history at the University of Ibadan, Nigeria. Subsequently he has held a teaching appointment at the University of Texas at Austin. Dr. Alao is an active member of various scholarly associations including the Nigerian Society for Legal History, the Historical Society of Nigeria and American Studies Association of Nigeria. He currently teaches history while conducting research in life studies at Obafemi Awolowo University, Ile-Ife, Nigeria.