SPIRIT OF AFRICA: The Healing Ministry of Archbishop Milingo of Zambia, by Gerrie ter Haar 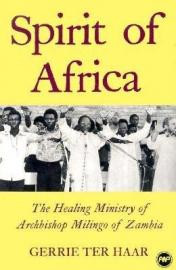 SPIRIT OF AFRICA: The Healing Ministry of Archbishop Milingo of Zambia, by Gerrie ter Haar

Only after his appointment as RC Archbishop of Lusaka, Zambia, in 1969 did Emmanuel Milingo become aware of his healing powers. Members of his congregation suffering from sickness or misfortune believed they had been possessed by evil spirits, and that Milingo was able to provide healing.

Milingo, an orthodox Catholic, "plunged into darkness" with his parishioners. He called on the Holy Spirit of Christian faith to liberate thousands of Zambians from the evil spirits which they considered to be the source of their suffering. He also made outspoken attacks on corruption in Zambian public life and other forms of misgovernment, which he equally saw as symptoms of evil.

Under the influence of the Charismatic Renewal movement in the West, Milingo came to believe that spiritual forces are present not only in Africa but all over the world. But the West, he believes, has lost its ability to communicate with the spirit world and thereby the ability to combat evil. He sees it as his mission to persuade the Catholic Church to re-learn this skill from Africa.

In 1982 Milingo was removed from Lusaka by order of the Vatican, and since then has lived and worked in Rome. Under the personal protection of the Pope, he continues to heal hundreds of sick and troubled people every week in Italy-- having been forbidden to do so in Zambia.

This book, based on research in Africa and Europe, provides the facts about Milingo's life and work, discusses his thought and his actions, and explains how he was forced to leave the country. It also describes and analyzes the conflict surrounding his healing ministry.