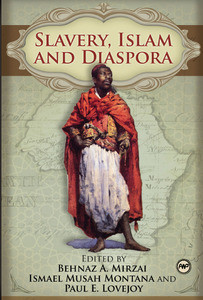 Slavery, Islam and Diaspora explores slavery in the context of the Muslim world through a study of the African Diaspora. The volume identifies the enslaved population as a distinct social stratum in Islamic societies and reflects on the ways Islam has been used to justify enslavement, liberate slaves, and defend the autonomy of communities. Local perceptions of Islam are shown to have strongly influenced the way people understood slavery.

A cast of talented scholars provides a rich and remarkable volume on the crucial linkages between Islam and slavery in different spaces and places, as well as historical eras, doing so to enrich our understanding of slavery and identity, religion and religious memory, historical commemoration, and the complicated contours of resistance and fiercely nationalistic values.
—Toyin Falola, The Nelson Mandela Professor of African History At Large

ABOUT THE EDITORS
Behnaz A. Mirzai, Assistant Professor of Middle Eastern and Iranian History, Brock University, is a specialist on slavery and its abolition in Iran, and especially on the African presence in Iran. Her award winning documentary, "Afro-Iranian Lives," records the lives of people of African descent in southern Iran.

Ismael Musah Montana, Assistant Professor, History, Northern Illinois University, has studied slavery in Tunisia in the 18th and 19th centuries, specifically concentrating on the Hausa speaking communities in Tunis and other parts of the Beylik of this province of the Ottoman Empire.

Paul E. Lovejoy, Distinguished Research Professor, holds the Canada Research Chair in African Diaspora History at York University, and is Director of the Harriet Tubman Institute for Research on the Global Migrations of African Peoples. He has published extensively on slavery and Islam.