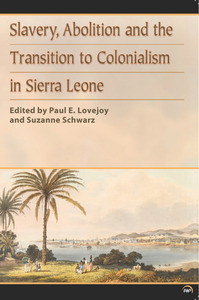 This volume places Sierra Leone within the larger landscape of the greater Atlantic world system in the eighteenth and early nineteenth centuries. The essays demonstrate that the meaning of “Sierra Leone” changed over time, initially designating the river only but subsequently a section of the upper Guinea coast and then the British colony after 1808. With the establishment of Freetown in the 1790s, Sierra Leone became a frontier of the African diaspora. Christianity, migration, the abolition of the slave trade, and experiments in labor mobilization through means other than slavery were haphazardly introduced in a context of missed opportunities.  The nascent British colony became an outpost in the fight against the slave trade and a place of settlement for enslaved Africans taken off slave ships.

“This volume brings together a wide-ranging collection of papers, all based on detailed original research, which serve effectively to contextualize the British colony of Freetown, Sierra Leone, both chronologically within the longue durée of history and geographically within the wider Atlantic world; it is of particular value in relation to understanding issues relating to the slave trade, the institution of slavery, the movement for their abolition, and the development of European imperialism in Africa.”

“A very important gap in the history of Greater Senegambia and Sierra Leone is now bridged through this extremely timely study of trade on the upper Guinea coast in the late 18th century, the failed British Province of Senegambia (1765-83), and the foundation of a ‘Province of Freedom’ on the Sierra Leone peninsula.”

“This collection of thirteen chapters, illustrations, maps, etc., bears testimony to the rich store of archival information on Sierra Leone, the upper Guinea coast, Senegambia and beyond.  This book is an invaluable compendium of ideas, facts and figures that will help in evaluating Sierra Leone's past and present for purposes of socio-economic development.”